"Life is Just a Picnic in the Park" -Tom Hays 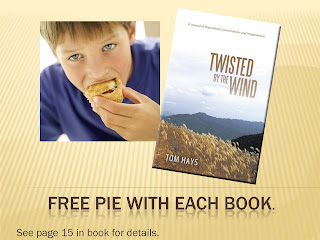 Ben used to go down to the park on Sundays with Frankie, his cousin.  They were about nine or ten at the most.   One particular summer, things got real interesting.
Frankie had learned how to look out for himself by that time.  He could squeeze himself into about anything interesting that was going on, and make it work out for his own benefit.
His momma spent a lot of time working, and, with no father to turn to, Frankie kind of grabbed onto Ben’s family. He and Ben were almost like brothers for awhile.  Frankie, a little older and more experienced, tried everything first, and sooner or later, Ben would follow.
So, on most Sundays that summer, Frankie and Ben would be down at the park.  They’d swing, and then slide, and then swing some more and then slide some more, climb on the monkey bars and run up and down the paths.  Sooner or later they would work up quite an appetite.
Frankie would go first, over to the picnic area where he would carefully survey the situation.  Then he’d pick out a table, one with a big family around it and a lot of other kids milling around to provide cover.
Frankie would slide up to the buffet and Ben would follow.  They would take a plate and start filling it.  Fried chicken, red jello with fruit cocktail in it, deviled eggs and pie … lots of pie.
Some woman standing by the potato salad would look them up and down, and ask them, “Now just whose boys are you two?”  Frankie knew to stuff a roll in his mouth before she got to the “you two?”  He’d use an exaggerated munching motion, moving his whole face up and down, and he would mumble with his mouth full.  Ben quickly stuffed his mouth, too.
Frankie would keep up his munching, and before he could finish his entire act, the woman would say, “You must be some of Mable’s!  My, you boys are sure growing.  Bet you’ll both be about as big as your daddy some day!”
Frankie would just nod his head up and down, and Ben would catch on and start nodding his, too, in agreement.  Then, two very agreeable young boys would slowly back away from the scene with full plates of delicious, genuine, Sunday picnic food.  Life was sweet.
That gambit worked all summer, perfectly every time … well, except for that one time … with the black family.
Ben figured the real moral to the story, politics and race aside, is to just approach life like you belong there.
Sooner or later, the world will tell you who it wants you to be to make it happy.
You just have to nod your head up and down, and enjoy the picnic.
Posted by Tom Hays at 2:42 PM