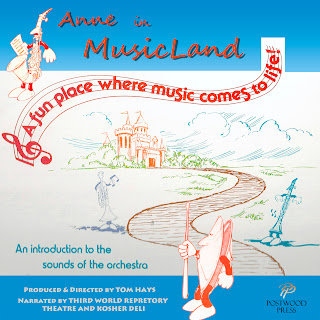 An introduction to the sounds of the orchestra. For pre-school, kindergarten and early grade school children. A young girl, Anne, finds herself in MusicLand and meets the various musical instruments.

This program was designed to introduce pre-school, kindergarten and early grade school children to the basic orchestra and band instruments. Basic emphasis in the program is on recognition of sounds of the instruments. The method employed is the utilization of a story theme and the development of a personality for each instrument introduced.

A young girl, Anne, is the vehicle through which the story progresses and the instruments are introduced to the listener. It is anticipated that the children will more readily recognize instruments with which they can associate a character or story.

Anne wakes up to the clash of cymbals at the gate of Musicland. She receives permission from Cymbal the Great to enter Musicland. Anne becomes involved in a disagreement between violins and "fiddles", searches for the missing Silent Sam the Cello, and meets many inhabitants of MusicLand, including Grandpa Bass, Violet Viola, Flighty Flute, Tiny Piccolo, Blacky Clarinet, Ruby Oboe, Bob Bassoon, and Jax the Sax.

In Chapter Two, Anne continues her search for Silent Sam the Cello so he can play in a special Musicland Concert. While searching for Silent Sam, she meets Boom-Boom the Bass Drum, Rat-a-tat Snare Drum, and Ting-a-ling Triangle. They invite her to join their parade in honor of Terry and Timmy Timpani who are returning to MusicLand after their successful debut at Carnegie Hall. She meets Big George the Tuba, Slipper Slide Trombone, Frenchy the French Horn, Mr. Trumpet, and the Timpani. Anne's adventures in MusicLand end with the successful concert appearance of Silent Sam, and a promise from Cymbal the Great that she can return to meet more MusicLand citizens in the future.

The children in your life will love this interesting story, while developing a new interest in music and the various instruments.  This fun recording is available through Amazon, Anne in MusicLand as an instant download.  Or, Click here to order the CD
Posted by Tom Hays at 10:08 AM No comments: